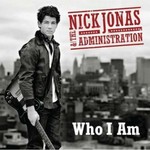 Nick Jonas & The Administration
Who I Am

Nick Jonas (of the Grammy-nominated and multi-platinum selling Jonas Brothers) releases his solo album, with his new band, The Administration. 'Who I Am' also features a bonus DVD!

Nick Jonas (of the Grammy-nominated and multi-platinum selling Jonas Brothers) releases his solo album, 'Who I Am', with his new band, The Administration.

Nick Jonas & The Administration is a solo project for Nick, featuring a band of legendary musicians who've played with the likes of Prince, John Mayer, and P!nk. In 2009, Nick flew to Nashville's Blackbird Studios with three years worth of song ideas not quite right for the Jonas Brothers, and recorded his side project, 'Who I Am'. He enlisted producer John Fields (P!nk, Backstreet Boys, Jonas Brothers) and they quickly pulled together an "A-Team" of musicians, which they gave the moniker "The Administration."

The Administration is made up of some of the world's most accomplished musicians. Producer John Fields plays bass, and he's joined by drummer Michael Bland, guitarist Sonny Thompson, and keyboardist Tommy Barbarella (Art Garfunkel, Ziggy Marley) all of whom played in Prince's band The New Power Generation.

Fueling the album's 10 songs was Nick's long-held fascination with politics, especially politics at the top. Throughout, Nick places allusions to the trappings of the presidency; from the White House Rose Garden to the symbolic olive branch and arrows clutched in the talons of the American eagle. But don't be mistaken, 'Who I Am' is not a political album. Rather, through the idiom of rock and soul music, it's a survey of the ungovernable human heart.

The album also features a bonus DVD capturing 8 studio recordings from the album, including the first single, "Who I Am". This videos provide a wonderful insight into the dynamics of Nick and the Administration and is a must have for fans.