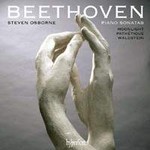 "The transparency as well as solidity of the performance resonates with an authority we might have ascribed to Rudolf Serkin, the iron paw padded by beguiling hues of velvet" (Four stars AudAud.com)

'The Moonlight, Op 27 No 2 , receives a particularly satisfying performance, from the first movement's magically limpid, unhurried mysteries, through the allegretto's sprightly curtseys, to the finale, so deservedly marked presto agitato. It's in this movement that Osborne really hits the heights. He drives the notes forward, stirring excitement without succumbing to the melodramatic … The Pathetique and Waldstein sonatas receive equally refreshing and sensitive accounts. And all are recorded with Hyperion's usual finesse' (The Times)

'In the 'Moonlight' Sonata, Osborne casts a spell from the very opening, suggesting improvisation yet also a searching harmonic rigour and beguiling the ear with subtle colour and touch' (ClassicalSource.com)

"These accounts of the Moonlight and Pathétique are both clean and powerful...Osborne performs the little G major Sonata, Op. 79 with great clarity and almost severely classical articulation...Perhaps the most intriguing performance here is of the Waldstein's finale" BBC Music