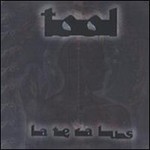 Approaching Tool's LATERALUS with a casual ear would be a careless endeavor, to say the least. The sheer magnitude of the musical and emotional textures is as heady as it is primal. Standing out as one of the defining traits of the Tool sound is Justin Chancellor's hau­ntingly melodic bass playing, which often launches into a role reversal with the mountainous guitar work of Adam Jones. The best examples of said phenomenon are found in "The Grudge" and "Reflection." Drummer Danny Carey slips easily into the pocket, fearlessly tackling odd time signatures and tasty percussion like few contemporary metal percussionists (best evidenced in "The Patient.") Lyrically, LATERALUS crawls through the cerebral catacombs of vocalist Maynard James Keenan, exploring themes such as the fallout from failed communication ("Schism") and clutching to past pain in a desperate attempt at control ("Grudge"). LATERALUS is yet another art-metal tour de force displaying the collective mastery of Tool.