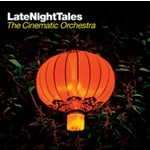 As Late Night Tales moves into a new decade, the long awaited chapter from The Cinematic Orchestra greets us with style. Following editions from behemoths of rock Arctic Monkeys and Snow Patrol, The Cinematic Orchestra's selection sees a return to a more typical Late Night compiler. Their association with the series reaches back to the inclusion of 'Channel 1 Suite' from their debut album 'Motion' on Zero7's memorable 2002 compilation. With track selection and order seeing many revisions since the inception of the project, we arrive with one of the most defined Late Night Tales yet to come in the series 10 year history.