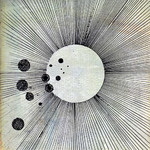 'Cosmogramma' is far too wide in scope to adequately describe, permeated with Flying Lotus' rich musical heritage (his grandmother wrote songs for Diana Ross & Motown) and the spirit of his famed aunt, Alice Coltrane.

Since his previous album 'Los Angeles', Steven Ellison (A.K.A. Flying Lotus) has become the torch-bearer for a brand new, truly global movement of musicians & fans - the world can't wait to find out where he's going to lead them next.

'Cosmogramma' is far too wide in scope to adequately describe, permeated with Steven's rich musical heritage (his grandmother wrote songs for Diana Ross & Motown) and the spirit of his famed aunt, Alice Coltrane...

'Cosmogramma' is set to be an important, ground breaking album in the vein of DJ Shadow's 'Endtroducing'; Madvillain's 'Madvillainy'; Boards of Canada's 'Music Has the Right to Children'; or Burial's 'Untrue'.

"'Cosmogramma' is an intricate, challenging record that fuses Flying Lotus' loves - jazz; hip-hop; videogame sounds; IDM - into something unique. It's an album in the truest sense... Flying Lotus is working at the height of his creative powers right now, and the scary thing is it's reasonable to think he could get better."
-PITCHFORK

"These incredible next-level productions instantly render Timbaland and his ilk irrelevant. It's the in-sound from way, way out."
-THE TIMES

"As Flying Lotus, California's Steven Ellison is doing for dubstep what Radiohead did for rock... An utterly bewildering, magical record."
-NME

"It feels like a game changer in the same way that DJ Shadow's 'Entroducing' did back in 1996."
-THE GUARDIAN GUIDE

"Flying Lotus makes trippy, psychedelic instrumental hip hop; slays dance floors with his incredible DJ sets; and has been called the Hendrix of his generation."
-MIXMAG

The Golden Age of Apocalypse