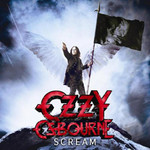 Being the follow-up to 'Black Rain', 'Scream' is Ozzy Osbourne's first album in almost three years, and 10th studio effort overall as a solo artist. Produced by Ozzy & Kevin Churko (both of whom did the same honors for the aformentioned 2007 worldwide million-seller, 'Black Rain'), this recording features lead single, "Let Me Hear You Scream".