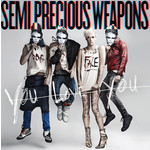 Semi Precious Weapons
You Love You

Fronted by the fierce Justin Tranter, the visual appeal of SPW - who are masterfully thrusting sex, glamour, and loving violence back into the rock & roll spotlight - is undeniable.

Boston Globe declares that "SPW splits the difference between AC/DC and Queen."

Fronted by the fierce Justin Tranter, the visual appeal of Semi Precious Weapons - who are masterfully thrusting sex, glamour, and loving violence back into the rock & roll spotlight - is undeniable. Tranter easily dominates any stage, with crowd pleasing antics ranging from gravity defying high kicks in his custom made Stuart Weitzman heels, to pouring champagne into eager mouths of fans.

What may be more shocking then their live show is the bloody, sweaty, reality of the band's achievements on their road to a major label deal. The level of musicianship of each member of the band is by no means the studio-produced image that dominates the scene. "I mean our damn drummer has a f***king degree in classical composition and I have one in songwriting, whatever that means..." states Tranter, who met drummer Dan Crean, Bassist Cole Whittle, and guitarist Stevy Pyne in Boston, while attending the Berklee School of Music.

With brash lyrics like: "I can't pay my rent, but I'm f***ing gorgeous," SPW quickly drew a loyal NYC following and were ultimately voted Best Band in NYC by the Village Voice. During their self-made uprising, SPW asked another NYC based rock 'n roll original, Lady Gaga, to open for them. This invite sparked a friendship that has endured and has culminated in these two uncompromising musical artists to embark together on one of the most talked about world tours this year - "The Monster Ball".

We leave the final words to Justin, "our new record is titled 'You Love You' because our not-so-secret mission is hoping that our fans will love themselves and rock 'n roll more than anything else, even me."

1. Semi Precious Weapons
2. Put A Diamond In It
3. Magnetic Baby
4. Statues Of Ourselves
5. Sticky With Champagne
6. I Could Die
7. Leave Your Pretty To Me
8. Rock n Roll Never Looked So Beautiful
9. Look at Me