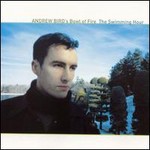 Listening to Swimming Hour is like taking a walking tour through 20th century musical history. Andrew Bird, a major contributor to nouveau-swing band the Squirrel Nut Zippers, mixes numerous styles and genres such as classical, Latin, and gypsy music, among others. The song "Why" feels like a jazz song from a 1950s film noir soundtrack, and "Satisfied" blends gospel with straight-ahead rock & roll. Also impressive is Bird's cover versions of the Mississippi Sheiks' "Too Long" and Nelstone's Hawaiians' "Fatal Flower Garden," a reworked rendition of an old Irish ballad. The vast array of musical styles are united by Bird's haunting vocals as well as lyrics that are both thoughtful and whimsical. While Swimming Hour is clearly an album obsessed with musical history, Bird manages to mix in enough of his own unique style to prevent the album from feeling like a musty old museum piece. ~ Jon Azpiri, All Music Guide