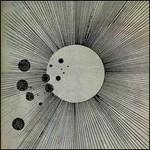 For 26-year-old Steve Ellison's deservedly hyped third album, Flying Lotus loosened the reins and set out to make Cosmogramma, which his label, Warp, promoted as a space opera of sorts. More of a long-playing, cohesive listen than the prior year's excellent Los Angeles, which felt like a collection of insular, Dilla-inspired beats, Flying Lotus evolved into a forerunner of his own personal genre. On this, his most far-out release to date, he incorporates a thicker amount of live instrumentation (horns, strings, bass, guitar, and even harp) with his laptop manipulations, and branches away from hip-hop.

Call it futuristic fusion, if you will, but the result is much more ahead of the curve than, say, Herbie Hancock's Future 2 Future (though it shares some similarities) and more on par with a Jaga Jazzist or a Four Tet release. That is, it's left of center. Free jazz plays a huge part, and Flylo draws deeply from his Coltrane lineage, but he also dips into past-prime electronic and dance styles. Techno, house, and drum'n'bass all take shape alongside IDM blips, dubstep, and disco strings or blaxploitation soundtrack orchestration, courtesy of OutKast and Erykah Badu arranger Miguel Atwood-Ferguson.

As a mass of shape-shifting layers, the album mutates constantly throughout the tracks, in a dense soundscape that sometimes feels palpable and at other times becomes liquid, rife with bottomless possibilities. Cosmogramma is an instrumental genre-jumping journey for head-bopping intellectuals, and the meditative melodies by vocalists Thundercat, Laura Darlington, and Thom Yorke only add to the experience. - AllMusic