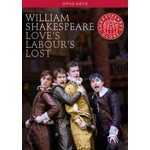 When the King of Navarre and his three courtiers forswear all pleasure - particularly of the female variety - in favour of a life of study, the arrival of the Princess of France and her ladies plays havoc with their intentions. Using every kind of verbal gymnastics to poke fun, Shakespeare's most intellectual comedy is brought to hilarious life in Dominic Dromgoole's highly entertaining production, rich in visual humour and sexual innuendo. Jonathan Fensom's knot garden and original music by Claire van Kampen create the framework for an engaging performance by an excellent cast. Filmed live in High Definition and true surround sound.

Doctor Faustus (recorded live at the Globe Theatre London in 2011)