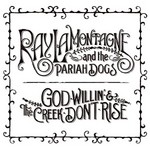 Acclaimed recording artist Ray LaMontagne presents his fourth studio record, and the follow-up to his heralded 'Gossip in the Grain'.

First appearing with the Ethan Johns produced 'Trouble' in 2004, Ray's blend of passionate, earthy and at times cinematic folk impressed critics and listeners alike. He followed it up with the more musically complex 'Till the Sun Turns Black' and 'Gossip in the Grain'.

For his fourth album, 'God Willin' & The Creek Don't Rise', LaMontagne has adopted a somewhat rough and ready recording process. Rather than take his usual year or so to mull over an album, LaMontagne locked himself away for one month to create the songs which appear on this one. Self produced and recorded live in just five days, the band (the Pariah Dogs) never heard the songs until the day they recorded them - and if ever there was an argument for creating music this way, 'God Willin'...' should be it. The sound is natural, organic; nothing feels forced or over thought. "Beg, Steal or Borrow" saunters casually, beautifully; carrying LaMontagne's parable ("...one of these days it's gonna be right soon you'll find your legs and go and stay gone") on the back of expert slide guitar and delicate percussion.

Ray LaMontagne is one of those rare gems, at once earthy and lush, soothing and exciting; but rather than being a sleek, shiny diamond in the rough like all the others, LaMontagne is the raw material."
- ERIN