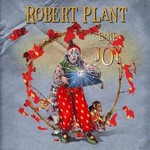 On 'Band of Joy' Robert Plant immerses himself in the heart of the Nashville scene, enlisting the help of some of the best players in the genre, including Buddy Miller and Patty Griffin.

"As half of one of the greatest songwriting teams in recorded sound, Robert Plant created rock history. Post-Zeppelin, Plant has enjoyed a successful career, releasing solo works as well as a number of collaborations. 2007 saw his pairing with bluegrass queen Alison Krauss achieve six Grammy Awards, including "Album of the Year". 'Raising Sand' showcased the diversity of his musical passion, perfectly melding the gentle wash of Krauss' vocals with Plant's more bluesy feel.

'Band of Joy', (which was, incidentally, the name of the very first incarnation of what would become Led Zeppelin), takes Plant's passion further. Immersing himself in the heart of the Nashville scene and enlisting the help of some of the best players in the genre, (co-producer Buddy Miller, singer Patty Griffin, and Dixie Chicks / Steve Earle's players) Plant explores traditional American music, while still making the sound his own... "I wanted to bring my personality to other people's songs... I mean... basically I sing the way I sing and to attack those songs in that particular way, I can only do them Plant-like..."

The album opens with Los Lobos' frolicking "Angel Dance"; "Central Two-O-Nine" is a wonderful Miller / Plant bluegrass tune; "Silver Rider" a dreamlike saunter guided by Plant and Griffin's ethereal vocals, something they also use to great effect on "Monkey". The album closes out with the haunting spiritual "Satan Your Kingdom Must Come Down" and "Even This Shall Pass Away", an sonic interpretation of a mid-19th Century poem; a wonderful ending to the album, and a continuation of Plant's diverse musical legacy."
-ERIN