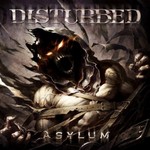 Disturbed present their 'Asylum' album - another killer recording from the Chicago hard rockers.

As with 'Indestructible', Disturbed self-produced 'Asylum', which the band began writing in September 2009 and recording in February of this year. Frontman David Draiman describes it as "still identifiably Disturbed, but showing more maturation. We feel this is one of the strongest bodies of work we've ever put together. It definitely goes in familiar areas, but with new levels of precision and skill."

Lyrically, Draiman says, the themes "range from very personal and introspective, to the political and provocative. What would you expect? No songs about puppy dogs or rainbows here."

"We want this record to be a shining example of how the years have made us stronger," Draiman says. "We want it to be an album that helps people get through their own trials and tribulations, as always."

The first single from 'Asylum', "Another Way To Die" deals with some very timely subject matter, as Draiman told The Pulse of Radio. "Obviously it's referring to the global catastrophe that we know as global warming, and the effects that it continues to have on our planet, and our irresponsibility in doing what we do as a species, and our constant appetite, our constant consumption at all costs, you know, no matter what is destroyed, no matter what is laid to waste," he said. "And certainly what's happening in the Gulf now is, you know, horrific."