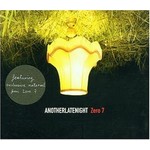 Get ready for the arrival of the highly respected after hours DJ mix series Anotherlatenight...

Taking it's lead from the Back To Mine series, the Anotherlatenight series gives it's DJ's and artists complete creative freedom to compile a selection of tunes highlighting their influences, preferred home listening and to basically wear their musical preferences on their sleeve

Sam Hardaker & Henry Binns aka ZERO 7, have been knocking around north London since they were teenagers, Sam the hip-hop guy and Henry the soulboy. Their debut album Simple Things is an absolute classic and stands strong next to it's contempories like Llorca and Air.

It's a truly successful formula, with previous volumes in this series receiving huge critical acclaim worldwide. These earlier volumes will be made available at a later date and include mixes from Fila Brazillia, Howie B and Rae & Christian.