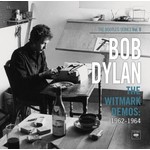 47 Bob Dylan songs recorded by the artist - accompanied only by his acoustic guitar, harmonica and occasionally piano - between 1962 and 1964.

'The Witmark Demos' features 47 Bob Dylan songs recorded by the artist - accompanied only by his acoustic guitar, harmonica and occasionally piano - for his first music publisher, Leeds Music, in January 1962, and for his second publisher, M. Witmark & Sons, between 1962 and 1964. Listening to these recordings, one can trace Dylan's dramatic growth as a songwriter from early traditionally-styled songs like "Man On The Street" and "Ramblin' Gamblin' Willie" through the social commentary of "Blowin' In The Wind, "The Times They Are A Changin'" and "Masters Of War", and the groundbreaking lyrical genius of "Mr. Tambourine Man." All of these songs, and all the others on The Witmark Demos, were written - and their subsequent demos recorded - before Bob Dylan turned 24 years old.

Among the many gems found on -The Witmark Demos- are 15 Bob Dylan songs that were recorded by the artist only for these sessions, and which have never been officially released to the public until now. These include the plaintive "Ballad For A Friend," the civil rights era-inspired "Long Ago, Far Away" and "The Death Of Emmett Till," and the poignant "Guess I'm Doing Fine."

While many of these early songs on 'The Witmark Demos' found their way onto Bob Dylan's own albums, much of the world's first exposure to them was through their recordings by others, including Peter, Paul and Mary and Stevie Wonder ("Blowin' In The Wind"), Judy Collins ("Tomorrow Is A Long Time") and The Byrds ("Mr Tambourine Man"). It's a testament to the lasting cultural impact of these songs that they have been covered by more than a thousand artists in the nearly fifty years since these demos were created.

The Best of Creedence Clearwater Revival