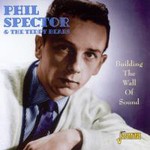 Phil Spector & The Teddy Bears
Building The Wall Of Sound

The pioneering early recordings of perhaps the greatest producer of pop records in US music history, and features his earliest attempts at production on the ultra rare recordings of The Spector's Three.

Includes stereo tracks and the international No 1 hit, 'To Know Him is to Love Him' by the Teddy Bears and features all known recordings of the Teddy Bears, which featured Phil as singer and guitarist.