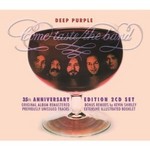 "Originally released in 1975, 'Come Taste the Band' is the only Deep Purple studio album to feature the late, great Tommy Bolin on guitar - and it's funkin' rock-tastic! Check out the solid grooves of "Gettin' Tighter" or "You Keep on Moving" and you'll be hooked too."
-GEOFF