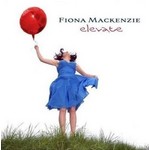 'Elevate' delivers a sound that is both unique and captivating. Fiona Mackenzie has created an album of musically fresh and instantly likeable songs.

Nominated for a 2008 Scottish Trad Music Award for Album of the Year, Elevate showcases Fiona's emotive self-penned lyrics which display honesty and raw emotion, delivered with her crystalline voice and distinctive sound.

A favorite with the critics, Audiophile Audition placed 'Elevate' in the top 5 albums for 2008, Mike Wilson at folking.com named 'Elevate' his favorite album of 2008, whilst award-winning singer Karine Polwart described it as 'a gorgeous, delicate album' and awarded it five stars. Co-produced by The Blue Nile producer Calum Malcolm, this is a fresh and modern release combining Fiona's Gaelic roots with contemporary production values.

Named in The Observer newspaper as one of the "Best Albums of 2008", 'Elevate' is the captivating debut solo album from singer/songwriter Fiona McKenzie. Now released on 180g vinyl, mastered by veteran mastering engineer Willem Makkee and pressed at Pallas in Germany, 'Elevate' features a beautifully designed 4-page booklet and is presented in a gatefold jacket.