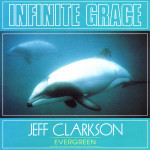 With a succession of top selling albums, visionary composer Jeff Clarkson travelled throughout New Zealand for many years performing his beautiful music before large and appreciative audiences. His mastery of music technology combines with his deeply spiritual nature to create the integration of "old and new" in a unique music that can reach inside and touch the most guarded of hearts.