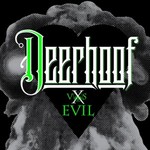 $18.00 In stock with supplier
ETA: 2-5 business days add to cart more by this artist

"...you'll keep returning to 'Vs. Evil' for its winningly alien hooks, its pop moments...an absolute joy."-Mojo

Think back to when you were 16. No one could tell you what to do. You were a force to be reckoned with - filled with the undeniable feeling that you could take on anything and win. Having formed in 1994, Deerhoof has now reached that fateful age and by rites it's their turn to go out and challenge the world.

The result is 'Deerhoof Vs. Evil'. The musical equivalent of hormones raging out of control, it explodes out of the speakers with its gawky triumph and inflamed sentimentality. These are songs that practically demand that you dance and sing along.

The same way a rebellious teen turns tough and irrational, right from the start you know you're hearing a daring band, unafraid of the consequences of failing.

Self-recorded, mixed and mastered in rehearsal spaces and basements with no engineers or outside input, 'Deerhoof Vs. Evil' dresses up Deerhoof's well-known reckless exuberance and splashes their sonic colours into the most unexpected combinations. It is Deerhoof's ode to their adolescence, and after one listen you know it's going to be a "Sweet 16."