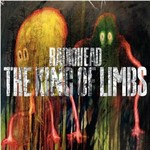 Radiohead
The King of Limbs (LP)

The follow-up to the gorgeous 'In Rainbows' and produced by Nigel Godrich, 'The King of Limbs' is the eighth studio album by the brilliant English rock band, Radiohead.

The title 'The King of Limbs' refers to an ancient oak tree in Wiltshire's Savernake Forest, near where Radiohead recorded the album. The tree is thought to be over 1,000 years old.

"Another work of musical artistry."
- Herald On Sunday, 4/5 stars

"In a quiet sidestep sort of way, Radiohead proved with The King of Limbs that they're world beaters once again." - Dominion Post, 5/5 stars

"For its confidence, sense of adventure and abundant musicality, "The King of Limbs" reinforces the idea that Radiohead is the band that makes the most interesting and satisfying rock recordings since the Beatles."
- Wall Street Journal

"Highly strung and instinctively contrary, but also deeply harmonically musical, Radiohead somehow finds a space between the sinister and the beautiful, the tense and the meditative. They remain masters of musical dichotomy."
- The Telegraph

"With 'The King of Limbs', the band displays such confidence and grace in its digital-age fussiness, it's hard to take your earbuds out after one listen."
- Washington Post