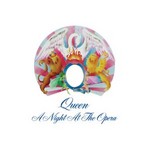 Queen
A Night at the Opera - Remastered

Newly re-mastered re-issue of Queen's fourth album, which was originally released in 1975. Undoubtedly a finely crafted work of pop genius - a must have for fans of classic '70s rock.

March 2011 sees the re-release of Queen's first five albums - one of the most exciting and influential back catalogues of all time. Recorded in the maelstrom of the early 1970s London music scene, Queen created a groundbreaking and unique soundtrack. Theatrical, imaginative, diverse, melodic and unpredictable they had a sound and a look all of their own. Sitting alongside their contemporaries like Led Zeppelin and David Bowie, Queen set the standard for British rock in the 1970s and became one of the most thrilling, glamorous and downright rock 'n' roll bands of all time. The music of Queen remains globally influential today, directly influencing a contemporary roll call of artists from Foo Fighters and Axl Rose to Lady Gaga and Katy Perry.

"The fourth album by Queen, released in 1975, proved to be their masterpiece. They unleashed their finest hard rock album 'Sheer Heart Attack' the year before and were beginning to get some popularity with the hit single "Killer Queen".

'A Night at the Opera' however made them a household name worldwide, due to the huge success of the phenomenal, groundbreaking song "Bohemian Rhapsody". That track is a main feature of the album - but there is plenty more on offer.

There is an overwhelming richness of melody, arrangements and classic vocals on 'A Night at the Opera'. The variety is superb, with multi-tracked hard edged rock numbers such as "Death On Two Legs" and "The Prophet's Song" on which guitarist Brian May shines. His rousing "39" is an irresistable, acoustic good time song as well.

Drummer, Roger Taylor contributes the excellent "I'm In Love With My Car" while shy bassist John Deacon supplied the catchy pop hit "You're My Best Friend". Freddie Mercury, of course, demands complete attention with flamboyant songs such as "Lazing on a Sunday Afternoon" and "Seaside Rendezous".

One of the finest pieces on 'A Night at the Opera' is the deeply moving and delicately beautiful "Love of My Life" which would become an emotional sing-a-long for crowds when Queen performed it in concert.

Undoubtedly a finely crafted work of pop genius, 'A Night at the Opera' is a must have for fans of classic '70s rock."
-GEOFF (December 2001)