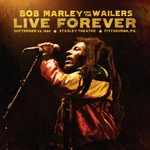 Authorized and endorsed by his family, this double-disc "in concert" album captures Bob Marley's final performance, which has been poorly bootlegged before but has never seen an official release...

"The result is a final fierce account, onstage, of an honorable revolutionary life."
-ROLLING STONE

"This memento of the gig again leaves us wondering what more he might have gone on to achieve."
-RECORD COLLECTOR

Voodoo of the Godsent