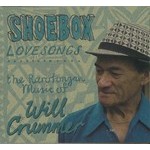 Will Crummer (father of Annie) performs plaintive and evocative songs sung in his mother tongue... classic and delightful, tunes that evoke a sense of history leavened with flare and humour.

Will Crummer (father of Annie) performs plaintive and evocative songs sung in his mother tongue. His sound mirrors his sartorial sense; classic and delightful, tunes that evoke a sense of history leavened with flare and humour.

Will Crummer is a living Pacific treasure: a master singer and encyclopaedia of Polynesian song. 'Shoebox Lovesongs' is his first album in almost four decades. It comes with a 50-minute DVD documentary, showcasing his songs and telling the story behind his music.

The father of New Zealand singing star Annie Crummer, Will was born in the small village of Turangi in Aitutaki in the Cook Islands, where he grew up surrounded by music: the singing of his mother, his grandfather's wind-up gramophone, the ukuleles and handmade percussion of the local string bands. And there was the radio, which brought him exotic voices from across the seas: Nat 'King' Cole, Jim Reeves, Pat Boone and Elvis Presley were a few of his favourites. From these various sources Will Crummer forged his personal singing style, blending the crooning of the pop stars with the rich and romantic tradition of Rarotongan song. In the 60s, Crummer came to New Zealand and was welcomed into Auckland's thriving Polynesian music scene, singing at such popular inner-city nightspots as "The Orange Ballroom" and "The Reefcomber". He made his first recordings for the Auckland-based Viking Records. These sold well and remained in print into the 1970s. As a performer he toured the Pacific, travelling as far as Tahiti and Hawaii. Family life slowed down his professional career but the musical gene had clearly been passed on to his children. Annie Crummer is one of New Zealand's most successful and best-loved singing stars.

In late 2010 Will Crummer went into Neil Finn's Roundhead Studios to record his first album in four decades, with producers Nick Bollinger and Arthur Baysting, film-maker Costa Botes, and a group which includes daughter Annie on harmonies and pa'u (traditional Rarotongan bass drum) and son Pat on guitar and ukulele. It also features a guest appearance by The Yandall Sisters, a duet with Annie Crummer and a string arrangement by Don McGlashan. Will Crummer is still singing as beautifully and soulfully as ever.