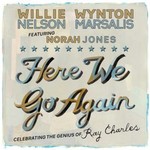 Once in a while the stars align and something magical happens...as on the night Jazz at Lincoln Center presented a salute to the late, great bluesman, Ray Charles.

Two musical iconoclasts, Willie Nelson and Wynton Marsalis, along with the stunning songstress Norah Jones, collectively brought their unique musical perspective to the legendary artist's hits such as "Hallelujah I Love Her So," "Hit the Road Jack," and "Unchain My Heart."

Country music legend Willie Nelson and Pulitzer Prize-winning jazz artist and Jazz at Lincoln Center Artistic Director Wynton Marsalis share more in common than their multiple GRAMMY® awards. They also share great respect and admiration for the late musical pioneer Ray Charles. Nelson and Marsalis joined musical forces for a two-night Jazz at Lincoln Center concert event at New York City's Frederick P. Rose Hall, home of Jazz at Lincoln Center. Their set list explored the legacy of Charles, cleverly sequencing the songs to tell the story of a love affair from beginning to end and beyond. This fine idea was made finer by the inclusion of fellow multiple GRAMMY® winner Norah Jones, whose style suggests a middle ground between Nelson and Marsalis. The sold out performance was captured and the resulting footage expertly mixed and mastered for the fabulous CD, 'Here We Go Again - Celebrating the Genius of Ray Charles'.

Chimes of Freedom: The Songs of Bob Dylan (Honoring 50 Years of Amnesty International)