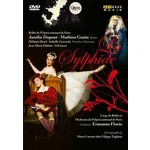 Arthaus presents Pierre Lacotte's landmark reconstruction of the Romantic Ballet La Sylphide, long regarded as a classic in its own right.

Arthaus presents Pierre Lacotte's landmark reconstruction of the Romantic Ballet La Sylphide, long regarded as a classic in its own right.

The original choreography by Philippe Taglioni had changed ballet forever. It introduced constitutional features of Romantic Ballet as we know it. These include dance en pointe and the tutu, which most certainly owe their omnipresence in ballet to the success of the 1832 staging of La Sylphide in Paris. Everything about the event combined to transform the ballet into a magical spectacle: the libretto, inspired by romantic literature, the bucolic exoticism of the village wedding festivities, the dramatic realism of the Sylvan forest, the eerie halo of the gas lights, the aerial flights of the dancers, the long diaphanous tulle costumes, and the ballerina's variations en pointes. Through this work, ballet master Philippe Taglioni managed to achieve a magical fusion between mime and artistic dance in a light and flowing style that gave birth to the first "white" act in the history of ballet. Pierre Lacotte's 1972 reconstruction returned to the very roots of Taglioni's work. Whilst writing a book on romantic ballet in 1968, he had discovered documents about Philippe Taglioni's 1832 La Sylphide, which enabled him to reconstruct the work.