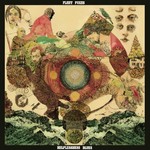 Fleet Foxes present 'Helplessness Blues', the much awaited follow up to their 2008 self-titled debut. "...expands the band's baroque folk songs by focusing heavily on rhythm and groove...

"Fleet Foxes' 2008 debut self titled album introduced us to a band who's richly layered tapestry of sound clearly revealed their influences. Influences vocalist Robin Pecknold describes; "We grew up listening to the music of our parents. The Beach Boys, Simon & Garfunkel ... Bach, Crosby Stills & Nash, Bob Dylan, Buffalo Springfield, and every other perennial '60s band you'd expect to find in the record collections of baby boomers."

Helplessness Blues, the latest from the Seattle five piece, again demonstrates the band's folk roots. It feels familiar, yet never stale or unoriginal; more like an old episode of your favourite tv show you somehow missed.

"...expands the band's baroque folk songs by focusing heavily on rhythm and groove, although Fleet Foxes' signature harmonies are also on full display."
- All Music Guide