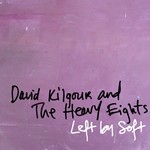 'Left by Soft' was recorded in the Catlins, about two hours south of Dunedin, New Zealand, in an old lodge surrounded by native bush, birds, and the sea. David spent about a week down there with the Heavy Eights. Thomas Bell engineered and produced but also played bass AND cooked the band awesome meals every night. After chilling out most mornings, the band would start recording mid afternoon into the night. Apart from a couple of overblown tracks, they kept overdubs to a minimum and when mixing left most takes as is?no cleaning up via Pro Tools editing, etc. "To me, it sounds like the band on a good night, warts and all," says Kilgour. "It's probably the first real "band" LP I've made since Frozen Orange or the David Kilgour and the Heavy 8's LP from the mid '90s."

David Kilgour is a guitar god for guitar atheists. He's worthy of worship, but his style neither demands nor expects it, all of which only serves to increase his otherworldly cool. 'Left by Soft', his first album in four years with the Heavy Eights, comes on the heels of the Clean's excellent 2009 outing, 'Mister Pop'. You could say it's all part of a late-career renaissance, but that implies there's been some sort of valley in his 30 years of making music. This time, there are more of the elegantly chiming chords and beautifully drifting solos, all presented with Kilgour's sparkling pop sensibilities.

The Heavy Eights are Taane Tokona on drums, Tony de Raad on guitar and keyboards, and Thomas Bell on bass and keyboards. David plays guitar, keyboards, and harmonica. Mike McCloud from Shifting Sands guests on "I'll Climb Back Up That Hill."

Your Highway for Tonight