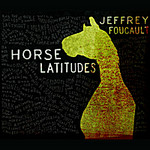 The horse latitudes are between 30 and 35 degrees both north and south of the equator and are characterized by warm dry temperatures and winds, resulting in deserts such as the Sahara Desert in Africa and the Sonoran Desert in North America. Now that you have a clue as to what the title is about, let it be noted that the songs on this disc are anything but a dry parched landscape; they are rich and full in lyric scope and musical vision. There is an immediate edge to the disc with the percussion work that opens on the title song; it is almost an immediate contradiction to my words about the fullness of this disc. The beats are spaced and leave open great spaces between them, the guitar is fuzzy and on the verge of breaking up. Yet when viewed as a whole it is full; it does mimic the desert which at first appears to be desolate and parched until you become at peace with it and see that there is abundant life where none appeared to be living; there is fruit, water and food it is just not as readily apparent as in other climates. It is a matter of stripping down to essentials to discover hidden riches. He finds those rich full spaces that come from leaving room for the listener.

The songs, ten of them that slip into your thoughts for almost 39 minutes, are delivered in a voice that acts as another instrument that is rich with nuance. The lyrics that can at times be overlooked, jar the consciousness when they rise to full thought force the listener to go back to the beginning to capture the full imagery. A sample from his song "Last Night I Dreamed Of Television":

"Last night I felt like I was dying,
And dying felt the same,
As silver clouds of ether singing,
Wild through my brain..."

Foucault has enlisted an all-star lineup of people to play along with him and they do a very good job of bringing his songs to a full and stunning life. Eric Heywood on pedal steel, baritone and electric guitars; Jennifer Condos on electric bass; Van Dyke Parks on keys and accordion; Billy Conway on drums; and Kris Delmhorst on backing vocals and cello. This Americana artist is set for a big breakthrough with this disc, a true gem that shouldn't be overlooked.
-B. Gottlieb

I'll Never Get Out Of This World Alive