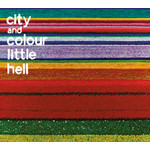 'Little Hell' is the third studio album from this Canadian act, aka Dallas Green (Dallas = City + Green = Colour) of Alexisonfire.

The album was recorded in February 2011 with producer/engineer/mixer Alex Newport. Newport is known for his cutting-edge work with At The Drive-In, Mars Volta, and Death Cab For Cutie to name a few.

Alternately sparse and inviting, intense and delicate, 'Little Hell' shows music fans another side of Dallas' incredible songwriting skills, and features some of his finest songs to date.

'Little Hell' is the first of Green's albums to be recorded and mixed to tape this sonic move ultimately resulted in the album's warm immediacy, allowing the songs to take on spaciousness previously unheard in City and Colour albums. The record allows Dallas to highlight all of the facets of his songwriting, from blues-tinged rockers to pedal steel-soaked acoustic gems.

Gold in the Shadow