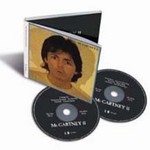 Personally supervised by Paul and newly re-mastered at Abbey Road Studios, 'McCartney II' is now re-issued as part of the Paul McCartney archive collection. The re-mastering work was done at Abbey Road, using the same team who re-mastered the complete Beatles' catalogue.

'McCartney II' was originally issued in May of 1980 and was McCartney's return to solo work after nine years touring, having released several massively successful albums with Wings. Reaching #1 in the UK, and #3 in the U.S., the album produced enduring classics such as "Coming Up, "Waterfalls," & "Temporary Secretary".