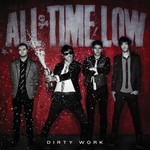 A 12 track mix of hard-charging anthems and sugar-shot rockers that are poised to dominate house parties and joyrides this year.

Since forming in the Baltimore suburbs in 2003, All Time Low have become one of the biggest pop-punk bands to emerge on the scene, building a grassroots following of die-hard fans with very little radio airplay and a touring ethic that would rival road-weary vets like Blink 182. Their profile is only going to rise with the release of their stellar Interscope debut 'Dirty Work' - a 12 track mix of hard-charging anthems and sugar-shot rockers that are poised to dominate house parties and joyrides this year.

For 'Dirty Work', All Time Low - featuring Gaskarth, Dawson, lead guitarist Jack Barakat, bassist Zack Merrick - teamed up with some of rock's most in-demand producers and studio aces, including Mike Green (Paramore, Boys Like Girls) and Butch Walker (Pink, Dashboard Confessional). The result is their most confident collection of songs yet, including the blistering "Time-Bomb" and "Guts," which features a guest spot from Maja Ivarsson of the Swedish indie-rock group the Sounds. All Time Low also roped in the master of the pop-rock anthem - Weezer's Rivers Cuomo - to co-write the upbeat and on so catchy "I Feel Like Dancing".