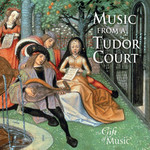 Delicate lute duets which conjure images of a courtly scene. Musicians play quietly in the corner of a garden, where the colours and scents are reflected in the twists, turns and melodies of this elegant music.

Lute playing was a favourite pastime of the leisured classes and the wealthy in Tudor England, and publications such as Robinson's 'The Schoole of Musicke' flourished. Equivalent publications appeared throughout Europe, all providing instruction and advice on music making, normally of both a practical and social nature. Such instructions books appeared for other instruments, too. In the late seventeenth century Francois Couperin was giving plenty of advice not only on how to play the harpsichord, but also on how to sit at the instrument for the best effect!

This collection of Tudor music for two lutes includes music by the important and famous composers of the day, not only from England, but also further afield. The Tudor court was famous for its music and for employing a large number of Italian musicians throughout the sixteenth century. The latter tracks on this album are therefore by European composers of the period, and feature primarily arrangements of famous songs and choral music of the day. Many pieces are anonymous, often with a Spanish flavour, but in some instances we have indicated where the music is found, to provide a context of time and place.

O, to be in England: Music for a green and pleasant land
more suggestions…