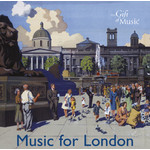 A musical tour of London's sights, with an atmospheric piece of music for every one. A fine reminder of a great city, from band music for changing the guard to Lloyd Webber in theatre land, and from soaring church music to popular songs from the East End.

Brass bands, cathedral choirs and theatre music are all typical musical sounds of London, whether you are watching the Changing of the Guard, visiting Westminster Abbey or having a night out on the town. This album brings together a wide range of songs and instrumental numbers to express in musical terms the diversity and range of sights experienced by any visitor to London.

From the music of a quiet recorder player in the Globe Theatre to the full and glorious sound of the Band of the Welsh Guards on the march, from the soaring voices of Parry's 'I was glad' to cheeky music hall songs, the album creates an atmospheric reminder of a visit to one of the world's great cities.

Our musical tour begins in royal fashion with a visit to Buckingham Palace and the ceremony of the changing of the guard, one of London's most famous sights, which takes place in the forecourt of Buckingham Palace, the monarch's official London residence and scene of many national expressions of joy and sadness. The brass band of the regiment charged on a particular day with guarding the Queen, march first along Birdcage Walk on their way to the palace. Westminster Abbey, our next stop, is also a royal location where Her Majesty has special rights and privileges. Coronations and other major state occasions take place in this glorious building and our second track, Jerusalem, is a fine example of music which celebrates Britain's past, and expresses hopes for the future. Other royal places are 'visited' during the course of the album, including St Paul's Cathedral and Horseguards Parade.

After such grandeur, the mood of our album lightens, as we 'go down the strand'. Musical hall songs such as this and 'Maybe it's because' were popular early in the twentieth century and remain well-known and much loved to this day. They capture the spirit of the colourful traditional street life of London's cockneys and the East End of the city. In the West End, we find theatre land, and we have represented this exciting and dynamic part of London with an extract from the score of the blockbuster musical, 'Phantom of the Opera'. Public music-making is a feature of the Albert Hall: 'Land of hope and glory' is often a part of the traditional 'Last Night of the Proms' concert which takes place there at the end of one of Britain's most important classical music series, the 'Promenade Concerts' which have been held in the hall every year since the Second World War, when the original venue was destroyed by bombs. 'Auld lang syne', our final track, recalls the New Year's Eve revels which have been held for many years in the cold outdoors of Trafalgar Square, where thousands of Londoners and visitors alike celebrate the New Year under the watchful gaze of the square's famous stone lions.

In Pastures Green: A meditatrion in Psalms, Poems and Music
more suggestions…