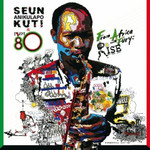 Co-produced by Brian Eno, Seun invokes the intensity, passion and power of Fela, while taking Afrobeat to the 21st century.

Fela Kuti was the father of Afrobeat. Others have tried to capture the intensity, passion and power of his music. And there have been great examples of Afrobeat since the time of Fela, but none have been able to claim they are carrying on Fela's legacy with the same strength as the original.

One of his sons, Seun, when still a young teen, worked with his late father's band to keep the fire burning by playing Fela's music in a way close to the original. This worked wonderfully and, on his first album, there was a purity to the homage.

This album has Seun composing all original material and while still invoking the intensity, passion and power of Fela, this album takes Afrobeat to the 21st century. While co-produced by Brian Eno, it does not change the focus of the evolution of Afrobeat and makes no allowances for western ears.

This album weighs a tonne - if you like a great horn section and driving drumming accompanied by a message about power and freedom - then this will be your album of the year!

"A relentless Nigerian funkfest, peppered with the same rhythmic intensity and rallying choruses that made Fela a legend of African song..."
-The Australian