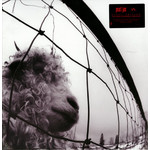 Pearl Jam took to superstardom like deer in headlights. Unsure of how to maintain their rigorous standards of integrity in the face of massive commercial success, the band took refuge in willful obscurity -- the title of their second album, Vs., did not appear anywhere in the packaging, and they refused to release any singles or videos. (Ironically, many fans then paid steep prices for import CD singles, a situation the band eventually rectified.)

The eccentricities underline Pearl Jam's almost paranoid aversion to charges of hypocrisy or egotism -- but it also made sense to use the spotlight for progress. You could see that reasoning in their ensuing battle with Ticketmaster, and you could hear it in the record itself. Vs. is often Eddie Vedder at his most strident, both lyrically and vocally. It's less oblique than Ten in its topicality, and sometimes downright dogmatic; having the world's ear renders Vedder unable to resist a few simplistic potshots at favorite white-liberal targets. Yet a little self-righteousness is an acceptable price to pay for the passionate immediacy that permeates Vs.

It's a much rawer, looser record than Ten, feeling like a live performance; Vedder practically screams himself hoarse on a few songs. The band consciously strives for spontaneity, admirably pushing itself into new territory -- some numbers are decidedly punky, and there are also a couple of acoustic-driven ballads, which are well suited to Vedder's sonorous low register. Sometimes, that spontaneity comes at the expense of Ten's marvelous craft -- a few songs here are just plain underdeveloped, with supporting frameworks that don't feel very sturdy. But, of everything that does work, the rockers are often frightening in their intensity, and the more reflective songs are mesmerizing. Vs. may not reach the majestic heights of Ten, but at least half the record stands with Pearl Jam's best work.
4 / 5 All Music Guide.
Limited edition re-issue on 180 gram vinyl.