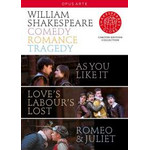 Shakespeare's Globe productions of As You Like It, Love's Labour's Lost and Romeo & Juliet are offered in this exclusive limited edition box set.

Thea Sharrock's irresistible new production of Shakespeare's popular romantic comedy As You Like It stirs wit, sentiment, intrigue and love into a charming confection which challenges the traditional rules of romance.

Dominic Dromgoole's production of Romeo & Juliet brings refreshing clarity to one of Shakespeare's most famous and best-loved tragedies. Ellie Kendrick, a truly youthful Juliet, and Adetomiwa Edun, a boyish Romeo, head an excellent cast whose period costumes point to the timelessness of parental disapproval, adolescent temperament, rivalry and violence.

"Naomi Frederick's superb Rosalind is a woman of wit and intelligence… Laskey's Orlando is equally bewitched, bothered and bewildered, and the playfulness between the two is a pleasure" (As You Like It) The Guardian

"Dromgoole is blessed with a smashing pair of young lovers. Adetomiwa Edun's Romeo is fresh, cheeky, light on his feet and full of the ebullience of young love...'' (Romeo & Juliet) Daily Telegraph

As You Like It
Love's Labour's Lost
Romeo & Juliet

Doctor Faustus (recorded live at the Globe Theatre London in 2011)