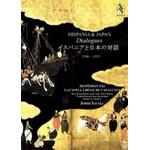 In 2006 Road to the Orient (AVSA9856) was released by Alia Vox. This double album was a musical portrait of Francisco Javier and of his trip from Spain to Japan. On this occasion, Jordi Savall met Japanese musicians who soon became his friends and with whom he performed in many concerts around the world. Consequently, following the catastrophes in Japan, Jordi Savall decided to release this special tribute album in which the most significant pieces of the dialogue between Spain and Japan are gathered.

A premiere in the history of CD packaging !

Included in the set : - a card miniature of a Japanese folding screen depicting the arrival of the first Europeans in Japan, card and book are shrink-wrapped together, CD sleeve is glued in the hardcover of the booklet.

All profits will be donated to the Japanese Red Cross.

A sticker will indicate the purpose of this release to consumers, which will also feature a picture of the unfolded screen.

"the mixture of western monophony and polyphony with some profoundly beautiful improvisations on them by Japanese musicians is illuminating and unexpectedly rewarding...the real connection throughout is the extraordinary beauty and mutual understanding on the part of the musicians, from both East and West, in this sumptuous, beautifully recorded disc." (Gramophone)