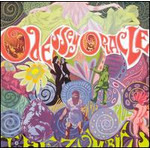 The Zombies were perhaps the most British-sounding of all British Invasion groups, and yet they never scored a hit record in their native U.K. The band released three great singles in the U.S, including the wonderful "Time of the Season," which concludes this 1968 masterpiece, frequently called Britain's version of Pet Sounds. This 30th anniversary edition presents both the stereo and mono versions (and there are substantial differences) of the melancholic, keyboard-dominated pop that flowed from Rod Argent and bassist Chris White. The Zombies' main songwriters explored "psychedelic" themes from odd angles. Here songs address a letter to a girlfriend in jail ("Care of Cell 44") and war ("Butcher's Tale"). There's even a "flowers-in-their-hair" hippie anthem (the gorgeous "Hung Up on a Dream"). Totally of its time, and, nevertheless, a timeless classic.