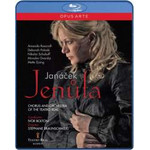 The vulnerable young woman at the heart of Janacek's breakthrough opera is a signature role for the English soprano Amanda Roocroft. Here, in Stéphane Braunschweig's clear but deeply affecting production, she is partnered by the Slovak tenor Miroslav Dvorsky, as the man through whom she finds redemption, love and hope. The complex figure of the Kostelnicka becomes both tormentor and tormented in this fearless interpretation by the great dramatic soprano Deborah Polaski.

"Braunschweig gives us Jenufa stark and simple, the stage almost bare, the opera's emotions stripped to the bone...Nothing is allowed to deflect concentration from the central human drama. Amanda Roocroft has won laurels as Jenufa in various stage productions and comes across as a deeply sincere performer here, even if the voice is apt to turn shrill at the top...[Polaski's] very understatement is moving in its own way." (Gramophone)

"Something in the composer's writing brings out the best in [Roocroft's] creamy voice and committed acting, and here she's superb as a young woman who forgives her stepmother for committing a terrible crime. Deborah Polaski, as the stepmother, sings with fierce power" (ClassicFM)

"Roocroft plays a Jenufa who moves believably from innocent girl to disillusioned woman...Only very occasionally do the musical care and dramatic restraint of Polaski's Kostelnicka not go quite far enough, but rather that than over-the-top histrionics...Schukoff exudes unmistakable sexual allure in his caddish role." (International Record Review)

"[Roocroft's] voice seems perfect for the role and she sings it superbly, as does Polaski as the Kostelnicka. Both characters come off as multi-dimensional, but Roocroft seems older than what one would expect...[Bolton]has the measure of the score and the orchestra plays very well for him. He balances the powerful sections where the timpani pound and the brass are given the lead, with the more lyrical passages" (MusicWeb)