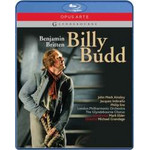 "none of the camera's interventions disturb the sweep of Michael Grandage's carefully realistic production...you're still sucked inside the drama, especially if you watch on a widescreen TV...[Imbrailo] is as ardent and puppyish as you could wish...the London Philharmonic revel in the baleful drums, salty woodwinds, and dark beauty of Britten's score. On DVD as much as in the opera house, this is a Billy Budd to remember."
(The Times)

Glyndebourne has a proud association with the operas of Benjamin Britten, however until 2010 had never staged Billy Budd. The all-male opera with a libretto co-written by EM Forster, is based on the battle between pure good and blind evil, and is set on a British man-'o-war ship.