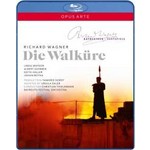 "[Botha] is outstanding throughout as Siegmund...Dorst's production, and this filming of it, are at their best in the latter stages of Act 3 and the result is a powerful and affecting account of one of The Ring's greatest episodes" (Gramophone)

"The sets, reflecting the blue-grey and orange hues of the Festspielhaus foyer, create some striking stage pictures...Botha as Siegmund is ungainly, yet gives this dark character unusual innocence and a voice both clarion and lyrical...Edith Haller's creamy-voiced Sieglinde is even more heartfelt...Albert Dohmen's voice isn't large, but delivery and acting make him a powerful Wotan."
(BBC Music)

"[Botha] is outstanding throughout as Siegmund...Dorst's production, and this filming of it, are at their best in the latter stages of Act 3 and the result is a powerful and affecting account of one of The Ring's greatest episodes...there's nothing obscure or understated about Thielemann's galvanising presence in the pit and seeing its effect on his singers in Act 3 makes these DVDs even more recommendable than the original CDs."
(Gramophone)

"[Botha] cuts an ungainly figure but sings Siegmund just about perfectly; there's power to spare, he sings off the text, his soft singing is appropriate and touching. Haller has a warm sound and uses legato like a bel cantist; the occasional high note may fly sharp but she's exciting and committed...Thielemann and the Bayreuth Orchestra create a ravishing wall of sound and not a moment is less that aurally stunning: one listens, agape."
(International Record Review)

Christian Thielemann, "by common consent the leading Wagner conductor of our time" (Die Presse), returns to Bayreuth for this radiant account of Die Walküre filmed at the 2010 Festival. Appearing on DVD and Blu-ray for the first time, it provides the only audio-visual document of Tankred Dorst's Ring production, and follows the hugely successful release of the whole cycle on CD. Two new singers join the cast: Johan Botha as Siegmund, who was showered with praise by the press ("ideal vocal casting" in the words of the critic on the Frankfurter Allgemeine Zeitung) and Edith Haller, with her "beautiful, strong soprano voice" (Süddeutsche Zeitung) as his sister and lover Sieglinde.

The making of Die Walküre