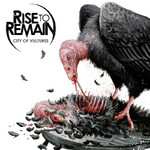 Rise to Remain
City of Vultures

A dramatic, blistering, melodic and hugely ambitious album, 'City of Vultures' is the sound of one of the most exciting new bands in Britain.

Recorded at Tree House Studios in Chesterfield in late 2010, 'City of Vultures' was produced by Carl Bown and legendary metal producer Colin Richardson who is renowned for his work with Slipknot, Machine Head, Bullet For My Valentine, Cradle Of Filth, Trivium and many more.

A dramatic, blistering, melodic and hugely ambitious album, 'City of Vultures' is the sound of one of the most exciting new bands in Britain, not only delivering on their early promise but setting the benchmark for all their peers to follow.

From the brutal roar of "The Serpent" and the guttural blast of the title track, through the hook-laden anthems of "This Day is Mine", "Talking in Whispers" and "Power Through Fear" to the widescreen melodies of "Roads" and the fan-favourite stomp of current single "Nothing Left", this is an album of breath-taking scope, driven along by virtuoso performances from all five members.

The album finishes with a brilliant re-recording of the lead track from their 2010 EP, "Bridges Will Burn", which saw them winning the Best New Band Award at both the Kerrang and Metal Hammer awards in 2010.