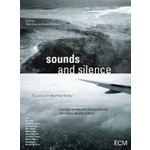 Over a period of five years, Swiss filmmakers Norbert Wiedmer and Peter Guyer followed producer Manfred Eicher and the artists of ECM around the world.

Over a period of five years, Swiss filmmakers Norbert Wiedmer and Peter Guyer followed producer Manfred Eicher and the artists of ECM around the world. In footage from Estonia, Tunisia, Germany, France, Denmark, Greece, Argentina and elsewhere, their documentary movie Sounds and Silence has captured aspects of the music-making process at ECM, and provided glimpses of unique players and composers at work. Amongst the artists included are Arvo Pärt, Eleni Karaindrou, Dino Saluzzi and Anja Lechner, Anouar Brahem, Gianluigi Trovesi and Gianni Coscia, Marilyn Mazur, Nik Bärtsch's Ronin, Kim Kashkashian, Jan Garbarek and others.

The film has already notched up a number of notable successes. It received its premiere at Locarno's Piazza Grande in front of an audience of 7,000 spectators in August 2009 and has since gone on to tour the world's festivals, including the Melbourne International Film Festival, the Viennale, San Francisco's SFJazz series, Estonia's Pimedate Ööde Filmifestival, the Hofer Filmtage and more. Sounds and Silence won the Berner Film Prize 2009, was nominated for the Schweizer Film Prize, and has collected some ecstatic reviews. As ORF summed it up: "The magic of ECM, in a rich, exciting, musical road movie."

Now the film is released to the public for home viewing in DVD and Blu-ray. ECM has been quietly building an outstanding catalogue of DVDs, but Sounds and Silence is the first to be released also in Blu-ray format, a decision already loudly approved on the internet fan forums. Bonus material includes scenes from Manu Katché's recording of Playground in New York.

"The film fascinates most when it makes the process of creating music visible and audible… There can hardly be a better choice for those who regard film as a school of listening." Wolfgang Sandner, Frankfurter Allgemeine Zeitung

"Eicher always remains at the sidelines, yet appears to be the true centre of musical proceedings: focusing, listening, observing, unapproachable and, at times, a little demonic. He knows what he wants and gets it. A Sisyphian task. Sometimes, quite unexpected, a small, boyish grin lights up his face. And once, during a recording in the Church of St Nicholas, he suddenly performs a little waltz with Arvo Pärt. In that instant, one must imagine him a happy man." Fritz Göttler, Süddeutsche Zeitung