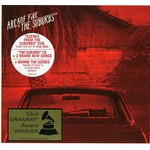 Deluxe anniversary edition featuring two new tracks on CD, plus a DVD including a documentary and music video for "The Suburbs". The exclusive booklet features lyrics and 80 pages of photos taken during the film.

The CD includes two new tracks (one featuring vocals by David Byrne) and an extended version of "Wasted Hours," in addition to the original album.