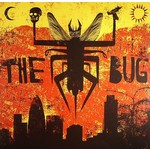 London Zoo is a record that could have only come out of london sound-system culture but whose appeal spans past any singular city or scene. London Zoo was born of three key moments.

An introduction to the burgeoning Dub-Step scene and it's key producers where Kevin realized there was others on the same sonic trajectory as himself, an introduction to Warrior Queen via his work with Wayne Lonesome on the Razor X Productions project, and a Mary Anne Hobb's Breezeblock session which introduced him to Flowdan (Roll Deep), and Ricky Ranking.

All three of which figure heavily in the end result and live presentation.

Side A:
Angry
Murder We

Side B:
Skeng
Too Much Pain