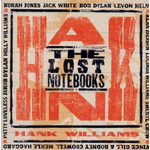 The first first-ever performances of 12 previously unheard Hank Williams lyric compositions newly set to music by 13 artists whose own sensibilities have been profoundly shaped by Williams.

Created from writings left behind by country music's "lovesick blues boy", 'The Lost Notebooks of Hank Williams' premieres the first first-ever performances of 12 previously unheard Hank Williams lyric compositions newly set to music by 13 artists whose own sensibilities have been profoundly shaped by Williams.

'The Lost Notebooks of Hank Williams' project began with the idea of finding a well-known artist, one who felt Hank's inspiration and influence, to record an album's worth of the unheard songs. After veteran music industry manager/A&R executive Mary Martin approached Bob Dylan, a natural first choice for the endeavour, the project evolved into a multi-artist tribute providing a variety of sympathetic approaches to this rich, mysterious material.

Other artists appearing on the album include Jack White, Norah Jones, Lucinda Williams and Alan Jackson, along with many more.

The odyssey of Hank Williams' notebooks is recounted in the album's liner notes, penned by Michael McCall from the Country Music Hall of Fame and Museum, who observes, "The history of Hank's notebooks is as complex as the legend himself. Yet, in the end, what matters most are the songs, and these new works rise from the ether with ghostly relevance. As with his many standards, these new recordings tap straight into the soul of man. This is songwriting at its most artful and most powerful."

1. You've Been Lonesome, Too - Alan Jackson
2. The Love That Faded - Bob Dylan
3. How Many Times Have You Broken My Heart? - Norah Jones
4. You Know That I Know - Jack White
5. I'm So Happy I Found You - Lucinda Williams
6. I Hope You Shed A Million Tears - Vince Gill and Rodney Crowell
7. You're Through Fooling Me - Patty Loveless
8. You'll Never Again Be Mine - Levon Helm
9. Blue Is My Heart - Holly Williams
10. Oh, Mama, Come Home - Jakob Dylan
11. Angel Mine - Sheryl Crow
12. The Sermon On The Mount - Merle Haggard

The Living and the Dead
more suggestions…