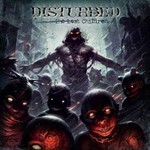 Disturbed's first ever B-sides collection, featuring rare and unreleased tracks, and a couple of covers.

Among the collection of B-sides fans will get to sink their teeth into a previously unreleased track titled "Mine", as well as "3" - the song Disturbed released through their website in April with proceeds benefiting the West Memphis Three.

As for actual B-sides, fans will get "Monster", "Two Worlds" and "Sickened", which were included as bonus tracks on the UK tour edition of 'Ten Thousand Fists'. From the band's limited-edition version of 2008's 'Indestructible' they've also included the song "Run".

The band went all the way back to their 2000 debut album 'The Sickness' to include special rarities "God of the Mind" and "A Welcome Burden", both song versions were part of the 2010 reissue.

Along with the B-sides and the unreleased tracks, Disturbed also show off their diverse influences with their own versions of Faith No More's "Midlife Crisis" and Judas Priest's "Living After Midnight".