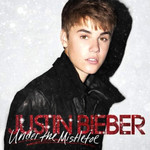 This version features bonus tracks and a behind-the-scenes doco!

Global phenomenon Justin Bieber begins his third year on the world stage with the release of his first Christmas album 'Under The Mistletoe'.

The album is a seasonal mix of traditional Christmas standards and newly penned holiday music largely co-written by Bieber.

The song "Mistletoe" was written and produced by the hit-making Canadian duo known as The Messengers (Nasri and Adam Messinger), who first wrote and produced Justin's chart-dominating hit of early 2011, "Never Say Never,"

In addition to "Mistletoe," the Messengers wrote and produced the songs "Christmas Love" and "Home For Christmas" (featuring The Band Perry).

This Deluxe version features bonus tracks and a behind-the-scenes doco!