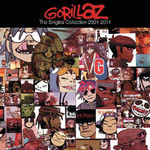 This collection serves as the perfect introduction into the band's unique mix of hip hop, indie, pop and electronica.